Thank you to Sinead and William, from Co. Kildare, for so bravely sharing your poignant story and talking about the importance of remembering. 💕 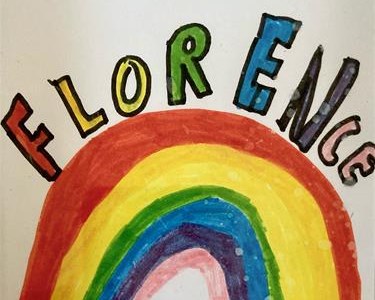 “On Monday 1 February this year our beautiful daughter, Florence, was born, though she sadly never got to take a breath or open her eyes. As I write this, it is seven months to the day since we rushed into Holles Street on Friday 29 January 2021, just a couple of weeks before her due date, only to be given the awful news that our baby’s heart had stopped beating.

It is a moment seared into the memories of my wife and me; being led into a small examination room by one of the maternity hospital’s midwives – my first time setting foot in the hospital due to Covid – where my wife was waiting, and I heard her say simply, “She’s gone”. In that moment, the wind was entirely taken from me, my mind at once numb to the magnitude of what has happened, and the future we thought was ours; everything we had ever wanted, gone in an instant.

Leaving the hospital shortly after that day, with my wife still pregnant but knowing our baby had died, I distinctly remember driving home thinking I never wanted to be back there again, that it would just be too hard and forever be associated with the saddest, hardest time in our lives. But more than that, in the terrible couple of days after, before returning to the hospital for Florence to be born, I confess to having very mixed feelings, fearing that the baby that we had spent the last nine months thinking about constantly, a growing bump we had adored, and whose arrival we had both been diligently preparing for in our own ways for so long, had not just physically died, but had also died in my mind. Where just a few days before, our baby had been alive and literally kicking, now the once-cherished bump had become something different, a de-humanised obstacle.

It's terribly sad to write of Florence in this manner and to remember some of the darker thoughts of that time. But I feel it is important to recognise and remember those two intervening days as they were, for the simple reason that once Florence was born, the reality was very different.

This is in large part down to the care and experienced support we received from the NMH staff from the moment we returned there for labour to be induced. Florence was born just after 6pm on Monday 1 February 2021, weighing 6lbs 8oz. She had lovely soft blonde hair, long delicate fingers, slender feet, and a beautiful heart shaped face, with a lovely small nose. We often wonder what colour her eyes were - brown like mine, or blue like my wife. As soon as she was born, it was clear why she had died.

After some time to monitor my wife after the delivery, we returned to our private bereavement suite where we spent the next 36 hours or so alone with our daughter, time that was hugely important to us, in the same way that the first few days are important to any new parent: allowing us time to bond with our child, to get to know her and to take in the enormity of what has happened, that our lives have changed forever. For even though she died, Florence has still changed ours forever as well. Having that private ensuite room allowed the three of us to close ourselves off from the world - and even from the rest of the hospital around us. That room was now ours for as long as we needed it, our refuge. Florence stayed next to us in a little Moses basket, that had an electric pad underneath to keep her cool, giving us time as a little family, to try and make some memories with her that we knew would have to sustain us for the rest of our lives; we knew we had so little time left before we would have to say goodbye to our daughter forever.

As her father, I know those couple of days were crucial in forming a connection with my daughter that I might not otherwise have. For me, it wasn't until we were back in our room, with Florence lying next to us in her Moses basket, dressed in the baby grow and hat we had brought for her, wrapped in the soft wool blanket I had bought weeks earlier, that I really began to see Florence as our little baby, our daughter. Staring at her through the night, she looked just like she was sleeping - we kept expecting her to suddenly move, to cry out. Every so often, the mind would almost trick you into thinking her chest was rising and falling, so peaceful did she look. But that is why the ability to have that time with her, in the private bereavement suite, was so important and why we decided then that we wanted to support the National Maternity Hospital, in whatever little way we could, in raising funds to furnish a new bereavement suite, to help those that we knew would sadly inevitably find themselves in our situation in the future.

We therefore set up a JustGiving page to tell some of Florence’s story, something that has been hugely cathartic for us in these months since she died. We are hugely grateful to our friends and family for their generosity and have been particularly touched by the many many strangers who have donated to Florence’s page, mostly after we were kindly given the opportunity to talk about our daughter and explain in our own way the reality of having a child stillborn, with Miriam O’Callaghan on her Sunday morning radio programme.

Also, while we certainly wanted to illustrate how important the bereavement suites in Holles Street are, we wanted to show our gratitude to the amazing hospital staff and the NMH Foundation for the support we received in our darkest time. Each of the midwives who shared this time with us showed unbelievable humanity and compassion, as well as experience, in guiding us through it. The wonderful bereavement team at the hospital, drawing on the resources of the NMH Foundation, did many of the things we would have wanted to do, but may not necessarily have had the clarity of thought at the time to think of. For instance, we were given various items to create tangible memories of our daughter - They took imprints of her hands and feet and some lovely photos which were put into a personalised album for us, as well as a frame with her footprints, for which we are now so grateful and we naturally treasure. Apart from anything, it was a huge relief knowing that there were others doing some of the thinking for you, lightening the load.

But it is probably impossible to adequately explain the tumult of emotions that we went through in the days around Florence's birth. We will never know who she could have been, we will never hear the sound of her voice, her laugh, or even of her cry. The sense of loss of our future with Florence, of all the potential and opportunity that her life held, is immense. What we are so grateful for, though, is the time we were given with Florence; it isn't a lot to hold on to, but at least it gives us something. The months since we buried our daughter have not been easy. For anyone going through it now, or who knows of friends or family going through something similar – it is really hard, a weight on one’s shoulders that never fully lifts. But there is support out there, which for us began with the NMH Foundation and Holles Street staff. We know that the support we received in those days after Florence was born entirely changed our perspective on what we were going through. Having thought I would never want to set foot in Holles Street again, we both now have an incredibly strong affection for the place, for the staff and for the time we spent there as a family with Florence.

Florence is with us in our thoughts every day. We like to talk about and remember our daughter, with the more people knowing the story of her short little existence, the more tangible her life remains. Opportunities such as the Pregnancy and Infant Loss Awareness Month and the ‘Walk to Remember’ Campaign are so important in this – hopefully allowing us to use our own experience to raise awareness of the reality of just one side of baby loss and perhaps help others going through something similar. Talking about Florence continues to help us come to terms with and understand what happened and, for us, there is certainly strength in sharing.”

If you want to join our virtual 'Walk to Remember', you can read more about it here: https://www.nmhfoundation.ie/events/walk-to-remember